“ New research has found that the pandemic has created an estimated 8.4m tons of plastic waste across 193 countries, and about 25,900 tons of that waste has leaked into the ocean. ”

Like all disposable goods, Personal Protective Equipment (PPE) generates waste once it’s been used. Of the 150 billion pairs of gloves produced annually, an estimated 100 billion pairs are thrown away each year — enough to stretch to the moon and back 30 times laid end-to-end. And these were pre-pandemic numbers!

While PPE waste was an issue before 2020, COVID-19 exacerbated the problem. PPE like face masks, sanitizer, and single-use gloves were instrumental in reducing virus transmission but inevitably ended up as waste. In the months after COVID-19 was recognized as a global pandemic, single-use glove waste rose over tenfold due to the spike in usage.

PPE waste became so problematic that it was common to see masks and gloves littered throughout neighborhoods. Alabama Wildlife and Freshwater Fisheries even warned in 2021 of disposed PPE posing a hazard to local wildlife, a result of having to deal with an increase in glove and mask litter. And that’s just the tangible environmental impact we see in our daily lives — new research has found that the pandemic has created an estimated 8.4m tons of plastic waste across 193 countries, and about 25,900 tons of that waste has leaked into the ocean.

A decade ago, SHOWA biodegradable nitrile gloves emerged as the industry innovator. Today, we deliver the most extensive selection of biodegradable hand protection in the market. SHOWA’s Eco Best Technology® offers the same protection, performance, and grip as regular SHOWA nitrile gloves, but is measurably better for the planet. SHOWA gloves recently achieved the GreenCircle certification for eight protective gloves that all met the necessary qualifications to be certified as biodegradable. 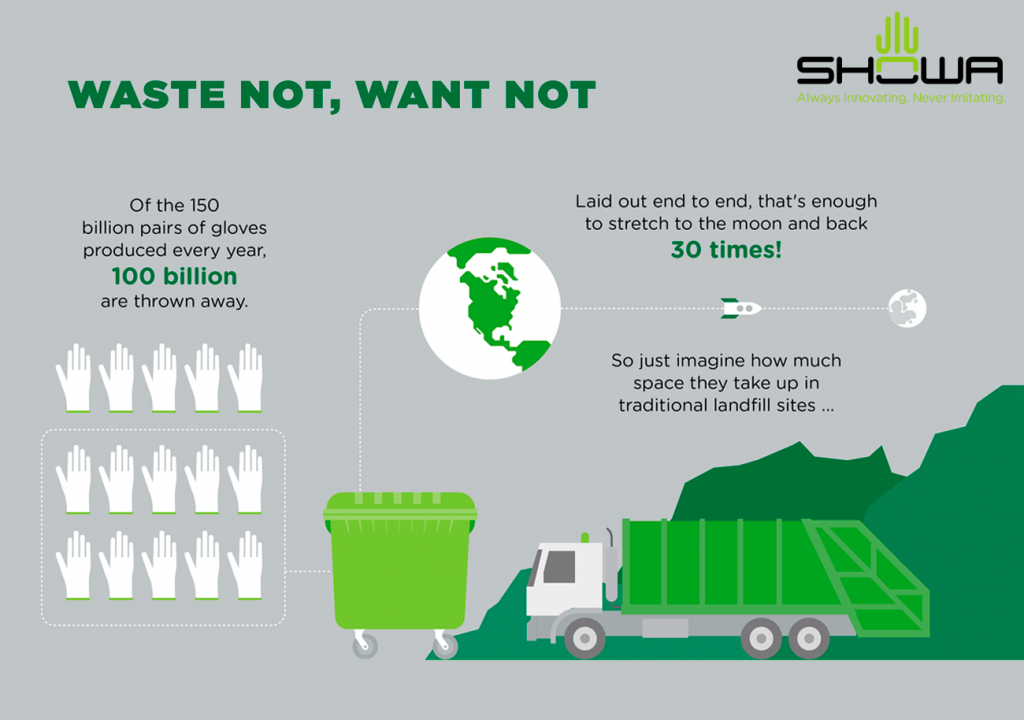 These kinds of advancements don’t occur overnight — enhancements to Eco Best Technology represent another example of SHOWA’s unmatched legacy in the innovation of manufacturing nitrile gloves made in the USA. For decades, SHOWA has developed gaming-changing inventions in the industry, including the world’s first-fully coated PVC glove in 1954 and the first single-use nitrile glove in the early 1990s. EBT is the next step in American-made nitrile gloves, so be sure to check out the broad range of styles and industrial uses of SHOWA biodegradable nitrile gloves.