“ During the 2016 Rio Olympics, Pavlos was using the ATLAS 300 Gloves. As he prepares for Paris 2024, he went through a rigorous process for selecting the most suitable SHOWA glove for his next challenge ”

Have you ever wondered how Olympians go about choosing the kit they’ll wear during the most significant event of their lives? When you’re in the moment, even the smallest discomfort or improper fit could affect your performance. Your clothing and gear operating as they should is essential for the best chance at success.

Professional sailor Pavlos Kagialis took part in the 2016 Olympic Games wearing a pair of SHOWA Gloves. Competing in the sailing event in a two-person dinghy, Pavlos and his teammate Panagiotis Mantis placed in 3rd, securing them a Bronze medal for their home country of Greece.

When sailing, the comfort and protection of your hands are imperative. Not only for sporting performance but also for safety. Hoping to replicate his success from 2016, in preparation for the 2024 Paris Olympics, Pavlos is selecting his next pair of SHOWA Gloves.

The 2016 Olympics were held in sunny Rio, where Pavlos competed in the 470M sailing event, winning himself and his country a Bronze medal. The 470M refers to the length of the boat in centimeters. Its design requires teamwork in order to sail it well, and to succeed at competitive sailing, every aspect must be mastered.

According to the International 470 Class Association, “The 470 is often quoted as the most challenging, dynamic and thrilling to sail of all the boats at the Olympics.” As the boat is suitable for a range of wind and sea conditions, it can be tactically demanding, requiring a lot of adjustments and fast response times. This means that he, and notably his hands, must be well-protected in anticipation of a challenging sail.

“Across the 11 Olympic Games in which the 470 Class has been raced, 20 different nations have secured Olympic medals in the men’s and women’s events, demonstrating the depth of participation and talent.” –  International 470 Class Association

During the 2016 Rio Olympics, Pavlos was using the ATLAS 300 Gloves. As he prepares for Paris 2024, he went through a rigorous process for selecting the most suitable SHOWA glove for his next challenge. The ATLAS 300 isn’t available for the European market, so our team suggested a few alternatives that align with Pavlos’ requirements.

After testing a variety of SHOWA gloves, Pavlos determined that the SHOWA 306, 310, and 330 are the best gloves for dinghy sailing. Naturally, it’s important that sailing gear is comfortable when both wet and dry, which was an area the three chosen gloves excelled in. As well as this, Pavlos was impressed with the fit, which comes from SHOWA’s form-fitting design.

For sailors, it’s crucial that gloves keep the same shape when they’re wet, and that the grip isn’t affected by moisture. With improper grip, sailors can waste a lot of energy. When gripping onto ropes, wet or dry, sailors shouldn’t need to clench ropes or trim sails with force to keep their hands from slipping. The gloves should be able to do a lot of the work for them, preserving their energy and improving their precision.

When testing our SHOWA gloves, Pavlos cut the fingertips to increase his sensitivity for when he needs to make a knot or to release one.

Pavlos determined that the SHOWA 306 is the best glove for light wind conditions. In low wind, sailors need a heightened sense of when to take and release ropes. The 306 provides more dexterity when power at the ropes is reduced. Pavlos noted that although it is a very technical glove, he felt like he was not wearing any gloves at all. And, the waterproof material is of course essential when sailing. 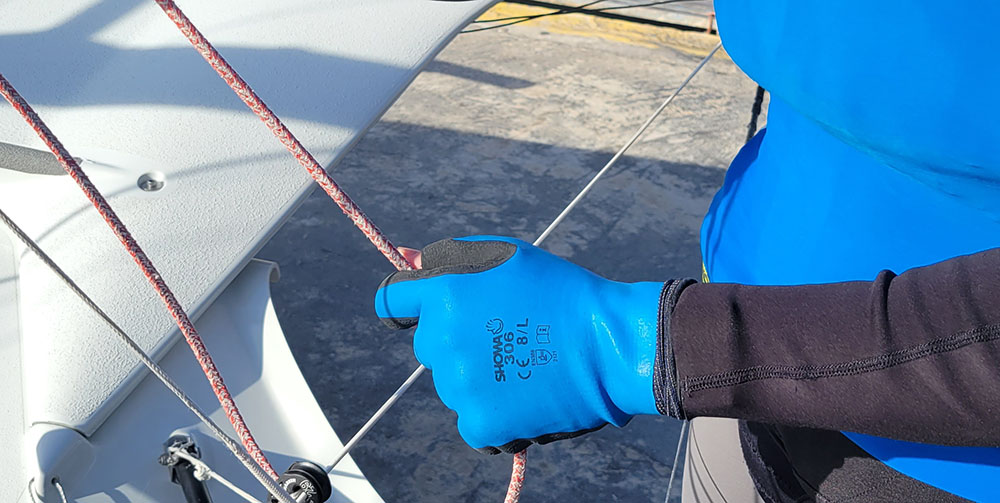 However, due to the protective dual latex coating on the SHOWA 306, Pavlos noted that on hot days the gloves may be too insulated for sailing in the sun.

The ATLAS 330 is very strong, and the grip is extremely hard-wearing which is crucial when dealing with ropes on a regular basis. However, there is a slightly decreased sensitivity due to the more enhanced, rough surface grip. 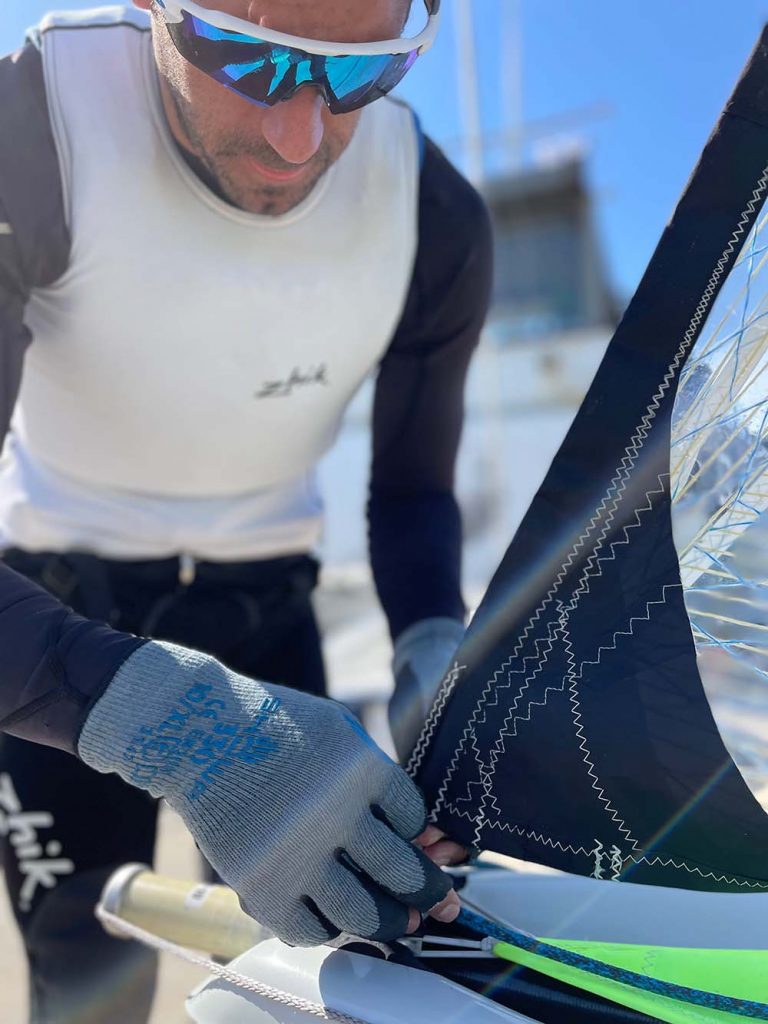 SHOWA Gloves aren’t designed with sports performance in mind. But due to the performance features and strict specifications they adhere to, the gloves found their place at the hand of an Olympic medalist.

Our gloves prioritize quality, durability, and comfort. We design our gloves for a variety of hazards and industries, meaning that their uses are widely applicable – even outside of the workplace.

Interested in learning more about people’s experiences of switching to SHOWA gloves? Take a look at some of our case studies.

STAY UP TO DATE
WITH SHOWA